In Honor of Earth Day: A Guide to Refuting Pro-Turbine Arguments

April 22, 2018
Below, you'll find an excerpt from a great blog post that deals with everything pro-turbine folks like to claim as a valid argument in favor of industrializing residential communities (as in Champaign County) with a network of 500-foot towers that will send energy (when it is produced at all) out of our county. The whole post is well worth reading. Click HERE  to go to the source and read the entire post. Blight for Naught: Wind Turbines and the Rationalized Desecration of Nature “To those devoid of imagination a blank place on the map is a useless waste; to others, the most valuable part.” – Aldo Leopold  * This mountaintop removal is praised by wind geeks who claim to hate coal mines. Wind projects don’t remove as much material but they prominently industrialize ridges. Early explorers would have seen this as an enemy gauntlet, and modern gut reactions are similar. There should be a penalty for ruining unbroken vistas. Unsettling numbers of environmentalists fai
Read more

A Layout of the Amended Project

March 17, 2018
Do you want to see where the turbines are located in the amended project? The proposed turbines are 492 ft. tall, an important factor in considering how EverPower/Buckeye Wind plans to place their industrial machines. Click HERE for the link to the map on the OPSB site.
Read more

March 17, 2018
File Photo from Madison Press Published in the  Urbana Daily Citizen , March 15, 2018... A huge thank you to Bob and Barbara Behling for representing the truth! This letter is in response to the March 10 letter in the  Urbana Daily Citizen  concerning the coal and wind industries. About 10 years ago we met with an EverPower representative and considered signing a turbine lease. We knew nothing about turbines at the time, but our subsequent research convinced us, without a doubt, that wind turbines did not belong close to homes. We realized that eastern Champaign County was too populated for these massive structures to be safely operated. After 10 years, we still believe that. The writer asks why there is a flurry of anti-wind activity in Champaign County at this time. It is because when EverPower filed a December 2017 amendment to the Champaign County project, maps with the proposed turbine locations were included. Admittedly, none of the turbines were in new locatio
Read more

January 31, 2018
Posted on January 29, 2018 by Urbana Daily Citizen Resident says Rush Twp. trustees letting down their constituents I am writing to voice my opinion on wind turbines coming into our community. I chose to live here with my husband in 2011 when we relocated from Massachusetts. We specifically wanted to be “far from the maddening crowd” of big city life. Rural Woodstock fit the bill. I only wish we had done more due diligence on the county before we committed as we did not realize the magnitude of the turbine projects slated to be constructed. My husband and I were appalled at the sneaky ways that Everpower used to get what they wanted from non-disclosure agreements, misrepresentation of facts, setbacks, and skewed data. Sadly, the once-friendly community has made enemies of longtime friends. Let’s not forget the few who spoke up in disagreement as abutters, only to be duped into signing a “Good Neighbor” agreement for a mere pittance. You cannot put a price o
Read more

January 31, 2018
Changes in the wind By Brenda Burns - Managing Editor - Urbana Daily Citizen January 25, 2018 Midge and Robert Custer stand near one of the out-buildings on their mini-farm on Parkview Road. The tongue-in-cheek message on the roof behind them could foreshadow Downsize Farm’s entry into the latest chapter of the Buckeye Wind saga. Downsize Farm is a Medicaid-certified facility for developmentally-disabled persons. The Custers are concerned about how the operations of a wind farm with turbines sited to the east and the west of them might adversely affect their clients. [ photo credit: Brenda Burns of the Urbana Daily Citizen ]  C hampaign County commissioners, several local townships, the Ohio Farm Bureau Federation and a new citizens group have filed notices to intervene in the amended Buckeye Wind/Champaign Wind project, according to case filings listed on the Ohio Power Siting Board’s website. The deadline for petitions to intervene was Monday, Jan. 22. Named Champaign Cou
Read more

Editorial in the Urbana Daily CItizen

June 16, 2014
http://www.urbanacitizen.com/ news/editorial/5035999/ Turbines-imperiled-by- shifting-political-winds Turbines imperiled by shifting political winds After seven years of development, controversy and exhaustive legal examination, the two wind farms planned for Champaign County might soon be put on the scrap heap because of recent state legislation that discourages their construction. It’s too soon to say for certain because the proposed projects continue to be affected by ambiguity on many fronts, but EverPower’s comments to the Columbus Dispatch on Sunday sounded like the beginning of the end of Buckeye Wind. “It’s clear this development isn’t wanted here … and it gives us less confidence in where Ohio is moving forward,” Michael Speerschneider, EverPower’s chief permitting and public-policy officer, told the Dispatch . “We’ll take that message to heart.” After Gov. John Kasich signed legislation on Friday that stops increases in requirements f
Read more
More posts

THE AMENDMENT TO THE BUCKEYE WIND PROJECT!

Check out the official documents to the proposed amendment to the Buckeye Wind Project. This amendment combines what was formerly Phase I & II into a single project. Several significant changes are being proposed.

You can find the most current 2018 documents by clicking HERE


For a summary of the originally approved Phase I: CLICK HERE.

We are your neighbors: people who own property in Champaign County just trying to discover the truth about what installing industrial wind turbines will mean to our homes, land, and community. We live here. This is our home, unlike the Big Wind company proposing this project. So whose perspective do you think represents the best interests of Champaign County? With all the rhetoric about wind power on both a national and local level, it's hard to distinguish fact from fiction. On this site you will be able to read about and view videos that deal with what it is like to live in such close proximity to turbines. From residents, from doctors and from wind energy experts without ties to the wind industry.
E-mail us at champaignwind@gmail.com

View of a wind facility from a nearby farm 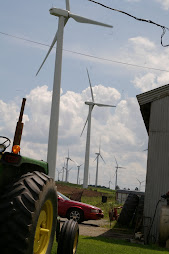